US Takes in Even More Apparel Imports from Vietnam 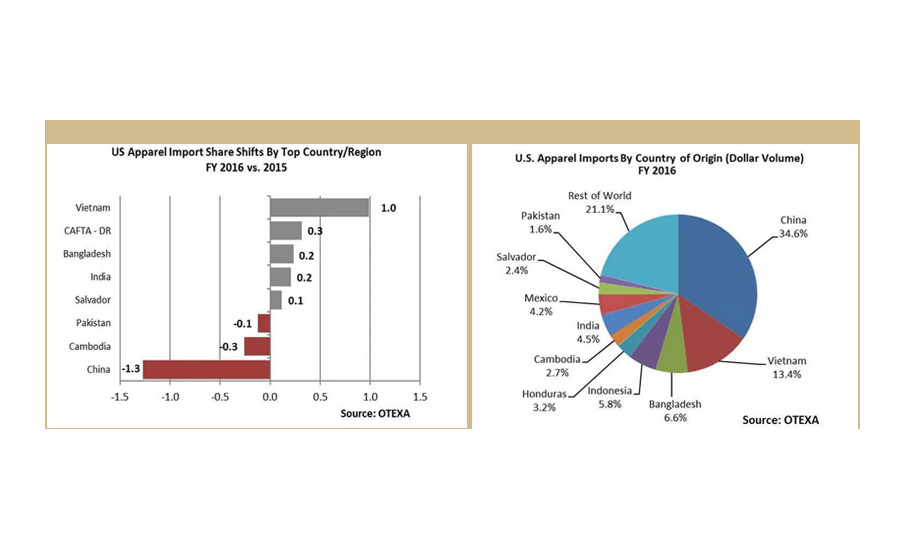 According to data released last week by OTEXA, the International Trade Administration’s Office of Textiles and Apparel, apparel imports fell 5.2% on an MFA basis in 2016, to $80.7 billion.

On a square meter equivalent (SME) basis, imports dipped 1.1%, indicating a shift toward cheaper goods compared to last year. The average cost per unit of an imported garment fell by 4.2%.

Vietnam was the only trading partner among the top 10 to grow their imports to the U.S. El Salvador, India and Bangladesh suffered the smallest declines, while apparel imports from Cambodia, Pakistan and China decreased the most.

China’s dollar share of U.S. apparel imports, which peaked in 2010 at more than 39 percent and has been on a slow decline ever since, dropped by 1.3 percentage points in the year, to 34.6%. Imports of manmade fiber apparel from China fell by almost 6 percent to $15.1 billion, while those of cotton apparel fell by 11 percent to $10.7 billion.

Apparel imports from Vietnam increased in 2016 by 2.3% year-over-year, to $10.8 billion. Though a distant number two source of U.S. apparel imports, its 13.4% share represents a gain of 1 percentage point.

Imports of cotton apparel from Vietnam fell by 1.4%, but those of manmade rose by 5.3%. Women’s manmade fiber knit tops and pants were the biggest import categories, and both grew significantly during the year at the expense of their cotton counterparts.

Apparel imports from Bangladesh fell by 1.8% to $5.3 billion, but remained virtually flat on a unit basis.Imports from Cambodia fell by 13.6% to $2.1 billion.

Pantone Selects Greenery as 2017’s Color of the Year