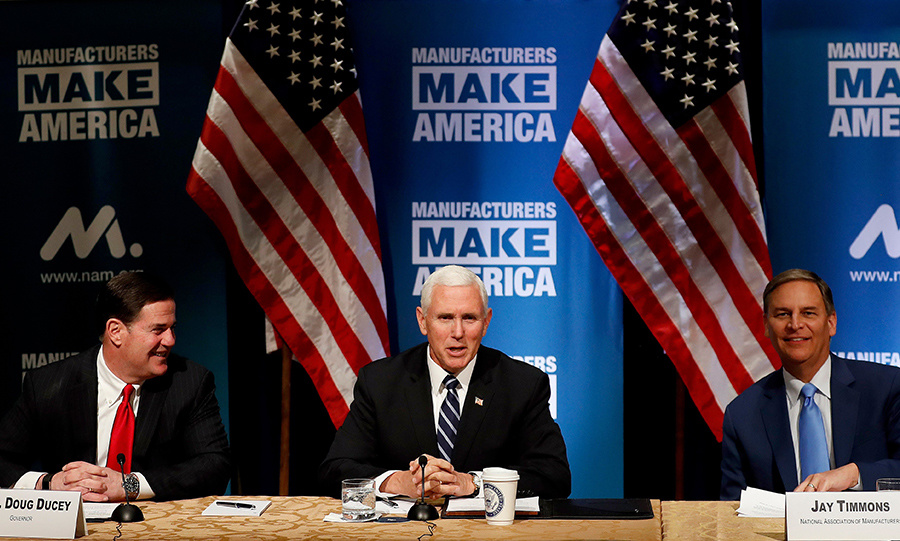 President Trump has made no secret of his interest in reshoring American manufacturing—particularly if it means fewer imports from China specifically. Now, with the coronavirus pandemic stoking already elevated tensions between the U.S. and China, he’s making further efforts to ensure it.

On Thursday, Trump released a plan to restore the Strategic National Stockpile of critically needed items, like PPE and medical supplies, and signed an executive order that grants new authority to the United States International Development Finance Corporation (DFC) to finance companies producing “vital goods and services,” according to a White House statement.

“My goal is to produce everything America needs for ourselves and then export to the world, and that includes medicines. It’s very important. Too reliant on other countries,” the president said during remarks Thursday at Owens & Minor, a medical supplies manufacturer in Allentown, Pa. “The final step in rebuilding the stockpile is to bring critical manufacturing permanently back to America. Wouldn’t that be nice?”

U.S. lawmakers, according to Reuters, are drafting proposals to drive U.S. companies out of China that could see them incentivized to uproot their supply chains with tax breaks and subsidies. Government officials and industry executives are also reportedly mulling a $25 billion “reshoring fund” that would go toward efforts to sway American businesses to adjust—or eliminate—their reliance on China.

The COVID-19 pandemic has exposed many U.S. companies’ over-dependence on China, as shutdowns and delays there led to component shortages that choked supply chains around the world. It also helped fuel a shortage in much-needed protective supplies, because before the pandemic, China was making the bulk of the world’s PPE. And now that the country’s return to business may be lapsing as a new cluster of coronavirus cases in China’s Jilin province has sent more than 100 million people back into lockdown, inputs may still not be entirely secure if the country is heading into its second wave.

“Since less than half of personal protective equipment is manufactured in North America, our supply chain was extremely vulnerable to foreign production interruptions,” an outline of the national stockpile booster plan reads. “Under the former system, the ability to determine what products were most needed, rapidly replenish items, and target the distribution of critical products to high-need areas was lacking.”

At the end of April, the National Council for Textile Organizations (NCTO) implored the U.S. government to implement a Buy American mandate, similar to what it has in place for military textiles, to support domestic manufacturing.

“Anything short of fully instituting domestic purchase requirements through Executive Order and other legislative initiatives will ensure that PPE production through U.S. supply chains that have been created overnight don’t evaporate as soon as this crisis is over,” NCTO president and CEO Kim Glas said in a statement. “In the midst of the crisis, our failure to confront this challenge will allow for a repeat of the sins of the past that allowed sourcing agents to offshore the entire production of medical PPE in search of lucrative profits.”

By Q4 2020, or “probably starting in the third quarter a little bit,” President Trump said the U.S. will be bigger and better than ever.

“We’re reclaiming our heritage as a nation of manufacturers,” he said.

Who’s Paying Garment Workers, Who Isn’t and How Can People Help?